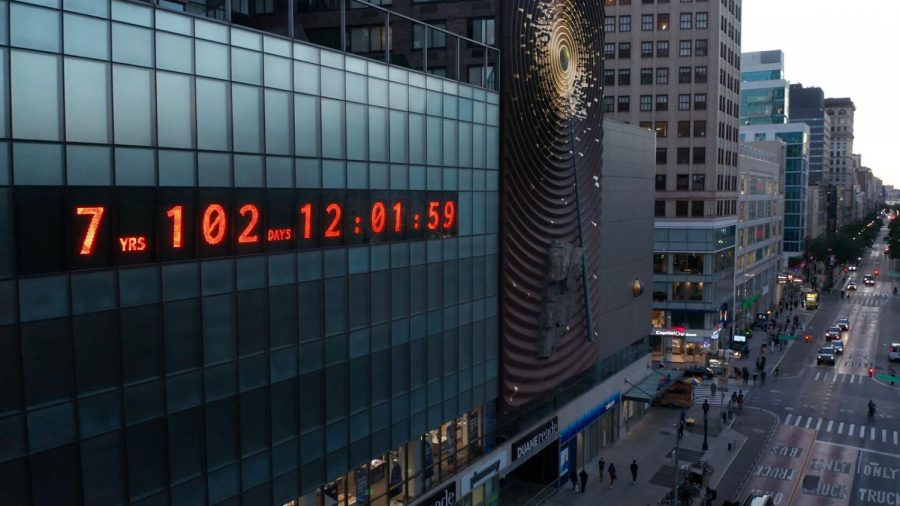 Recently, a ticking clock in the Manhattan Union square was posted to the side of a building. People would eventually find out that this timer was a deadline, specifically, a deadline for how long humanity had until solving the global problem known as Climate Change.

The message “Earth has a deadline” began to appear on Sept. 19th, 2020. With this new information, it sparked a conversation within all people alike. As the more days pass by, the less time we have to solve a major problem on earth. The question remains, “How can the public help?”

When thinking of climate change, one of the first thoughts that come up is Global Warming. Global Warming is the increasing temperature of earth due to the Greenhouse effect. Much like the name, the Greenhouse effect is caused by certain gases trapped inside earth’s atmosphere. These gases can either be naturally produced by the environment, or produced by us humans, such as CO2 (Carbon Dioxide). CO2 is one of many gases that hurt the environment, which get trapped inside the atmosphere. Factories are well known for producing a large amount of CO2, by burning fossil fuels.

It is important to note that there are many solutions towards climate change. One of most common solutions is to simply produce less greenhouse gases. In retrospect, this would mean that humanity would have to resort to an “electrical” stable lifestyle. Using things such as Solar Panels to power our houses, or electrical cars to restrain Carbon Monoxide production can all benefit our environment. Other solutions such as reducing food and water waste can also have a positive benefit.

Another benefit to help towards Climate change is planting trees. On Oct. 25th, 2019, a fundraiser known as Team Trees was started in order to take action towards deforestation, which is the second largest cause of climate change. Many content creators promoted and donated to the organization. The plan of the fundraiser was to plant 20 million trees by the end of 2020. For each dollar donated, one tree was to be planted around the world. The goal would eventually be satisfied. The fundraiser still remains open to this day to donate.

There are many people that believe global warming is a myth. It is very important to persuade as many people towards helping out with this problem. “I think that global warming is a real thing and is a massive problem for the globe,” sophomore David Escobar said. “With temperatures rising, we see stronger natural disasters like hurricanes and thunderstorms. Overall, I think it’s very bad and it should be dealt with.”

It is within our responsibility to do everything in our power to help earth with Climate change. Every little thing that you do can help. Getting involved towards these major projects can make you a better person as well. Every day, new projects are created to help out with climate change, and some are even fulfilled.